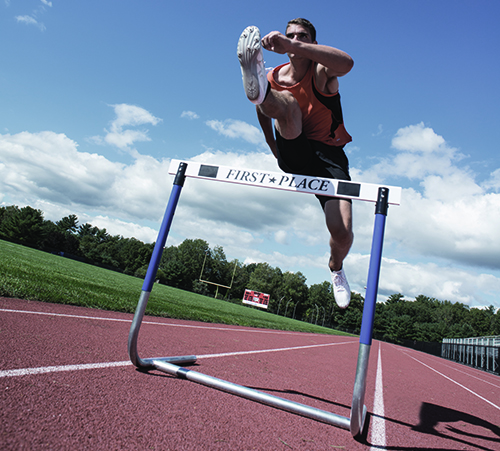 I want to spend some time providing some suggestions, particularly to coaches who are new to coaching the hurdles, in regards to how to identify potential hurdlers, and how to go about coaching them in their early stages of development.

1) The first thing I look for in identifying potential hurdlers is work ethic.
The reason for this is because no matter how tall, how fast, how strong, or how quick an athlete is, he or she cannot be a hurdler without the willingness to put in a lot of hard work and to overcome a tremendous amount of frustration. Learning how to hurdle efficiently is a long, arduous process, so athletes who are looking for immediate results don’t need to be trying the hurdles. Also, in regards to work ethic, hurdlers have to do the running workouts that the rest of the team does, and they also have to do hurdle workouts to improve their technique, which means they are usually the last athletes on the team to leave the track at the end of every practice. Anyone not willing to do such work needs to just go ahead and sprint. For me, when I see an athlete who doesn’t back down from tough workouts, who is demonstrating a genuine desire to get better, I’ll ask that athlete if he or she wants to try the hurdles.

2) Another quality I look for in identifying potential hurdlers is aggression.
That’s why, so often, I look to the wide receivers, defensive backs, and running backs on the football team for my hurdlers. Many beginning hurdlers are afraid of the obstacle. So I look for athletes who have an edge to them, who seem to be risk-takers, who know what it means to attack. Again, good height and good speed don’t matter if the athlete is afraid of the obstacle. My experience is that someone who is initially afraid of the hurdles doesn’t change with experience. One thing I’ll do with beginning hurdlers is to set up a hurdle at the first mark and tell the hurdler to sprint through the hurdle at full speed. I won’t offer any technical advice, but just say run as fast as you can and get over the thing. The ones who actually sprint are the ones I know I’ll be able to work with; the ones who don’t might just need a little more coaxing, but they also might need to try another event.

3) The athlete has to want to hurdle.
If you have a 6’2”, 185-pound athlete who you know could dominate the hurdles, and then, when you ask him to try it, he looks at you like you’re crazy, leave him alone. Not everybody is a hurdler, not even people who look like they would be naturals. If you keep bugging the kid, and he finally says yes just to get you off his back, your relationship will be a contentious one, because you’ll get tired of his inconsistent work ethic, and he’ll resent the fact that you have him hurdling at all. On the flip side of that, my personal policy now is, if an athlete approaches me unsolicited and asks to try the hurdles, I will never say no, regardless of his or her body type. I realize now that anyone who wants to hurdle is a hurdler, so I as the coach cannot allow myself to get in the way of that. Regardless of the athlete’s talent level, my job is to facilitate the learning process, believing that if we work hard together, we can make something magical happen.

4) Disregard height.
Too often, coaches are enamored with height. Renaldo Nehemiah, the greatest hurdler who ever lived, was only 5’9” in high school. Allen Johnson, the greatest hurdler in the world for the past decade, is only 5’10”. Gail Devers is only 5’3”. Perdita Felicien is only 5’4”. Need I go on? If the athlete embodies the factors I’ve already discussed – work ethic, aggression, desire – then height issues can be overcome. Of course, a male in the range of 6’0” to 6’1”, or a female in the range of 5’7” to 5’8”, would be ideal, for the simple fact that if they have any kind of speed, they’ll be able to three-step relatively soon after they first start out in the event. But you can’t always go by that. The best 110 hurdler I ever coached was only 5’10”, 140 pounds, and he ran 14.21. I had no idea when I first saw him show up on the track that he would end up being that good. The fact that he did tells me that height isn’t everything.

5) Of quickness, speed, and power...
You’ve got a see at least one of them to consider making someone into a hurdler. Some athletes lack power but have exceptionally quick turnover. Some have raw sprinting speed, while others are real strong in their upper bodies and in their quads and hamstrings. Once you know the athlete’s strengths, place an emphasis on the strengths while also seeking to develop the weaknesses.

6) Flexibility
is one of the more under-rated factors that makes for a good hurdler. The motion of going over a hurdle requires a great amount of flexibility in the hamstrings, lower back, groin, and hips. Kids with dancing or gymnastics backgrounds often make for good hurdlers. On the girls’ side, girls who have a cheerleading background can often make for good hurdlers as well. Athletes with good flexibility are generally more durable than others, as they aren’t as susceptible to muscle tears and the like that come with practicing the hurdles regularly.

1) To me, the most important thing to teach beginning hurdlers is to sprint on the balls of their feet, not on their toes (too tall), and not on their heels (too low), which is most common. Running between the hurdles on the balls of the feet, with the chin up and back straight, is essential to being able to execute proper hurdling mechanics. Beginning hurdlers will often rock back on their heels because they’re afraid of the obstacle, so getting back on their heels is a way to gear up for hurdle clearance. Once you’re on your heels, there’s nowhere to go but up, whereas a hurdler wants to go forward, into the crossbar, in order to reduce air time as much as possible.

2) Lead with the knee, lead with the knee, lead with the knee. Want me to say it again? Lead with the knee. Coaches need to teach athletes that the knee of the lead leg should never be fully locked at any time during hurdle clearance. As the hurdler takes off into the hurdle, the knee of the lead leg should be driving directly at the crossbar in order to ensure low hurdle clearance and a quick snapdown back to the ground. Many beginning hurdlers swing the whole leg from the hip, which makes for all kinds of balance problems with the hips, the arms, as well as with the legs. One way I explain it to my hurdlers is to say that your lead leg knee is your steering wheel. It guides you, it directs you, it leads you. If the foot of the lead leg is getting ahead of the knee too soon, then the foot is leading the way, which is nothing but trouble.

3) Beginning hurdlers should do a lot of hurdle drills. Even experienced hurdlers should, but it is essential that beginning hurdlers do so, so that they can develop muscle memory that will enable them to internalize proper hurdling mechanics. Walk-overs are a good drill for beginners. Set up five to ten hurdles at 30” to 33” high, lined up directly behind each other, and have the athlete walk over the hurdles, focusing on keeping the hips square and driving up the knees. Another good drill for trail-leg mechanics is the fence drill. Put a hurdle anywhere between 30” and 36” inches, and have the hurdler put his hands against a fence or wall, and circle his trail leg around the crossbar a series of times. Three sets of ten is usually a good number. This drill helps to develop mechanics, and it also strengthens the groin muscles which bear the brunt of the strain on the trail leg side of the body when hurdling at full speed. Another basic is the lead leg drill and the trail leg drill in which five hurdles are set up on the regular hurdle marks, and the hurdler bounces five steps between the hurdles, clearing with just one leg. Isolating one leg helps the hurdler to get a feel for how that leg should be moving up and over the hurdle without having to worry about bringing the whole body over the hurdle. It’s also a good warm-up. Three times each side over five hurdles is a good number.

4) Never hurdle at race distance in practice. Beginning hurdlers are usually very eager to find out if they’re ready to race. However, it’s more important that they develop proper mechanics first, so it’s the coach’s job not to rush things too much. In practice, especially for beginning hurdlers, it’s more important that they clear a lot of hurdles. Therefore, move the hurdles closer in so they don’t have to sprint very fast, but will be able to clear more hurdles before they start fatiguing.

5) Don’t put a beginning hurdler in a race until he or she is ready to race. This concept goes along the same lines as the previous one. You can’t rush things. I’ve always said that the best time to develop a new hurdler is during the pre-season, when there aren’t a whole bunch of meets getting in the way of training. Once the outdoor season starts for most high schools, there are so many meets in the way that a beginning hurdler doesn’t have the time to develop mechanics. If a hurdler is learning how to hurdle during the season, it’s usually best to wait until the third or fourth meet to have him or her race over the hurdles. Nothing does more damage to a beginning hurdler’s confidence than racing too soon and getting beaten up by more experienced hurdlers from other teams.