I start by creating my end-of-season goal workout. This cross country workout goes at the very end of the competitive phase of training and before the championship phase (the week of districts). The reason I start with this is that every workout we do throughout the entire season is going to build toward this workout. This gives the athletes an easy-to-understand purpose of each workout as well as preparing them for the race conditions they are going to face at the end of the season.

I do not use complicated workouts because I am working with high school cross country athletes and prefer to make it simple for them to execute. I usually start with something like 6x1k @5k goal pace with 300m jog recovery. Do not read too much into the 300m jog recovery. It is only that distance because it is convenient for where our 1k grass loop is located. Once I have established my end of season workout, I start working backward through the competitive season portion of the funnel. If my end-of-season workout is 6x1k@5k, then the second to last workout might look like 5x1k@5k / 800m@2mi. Working my way back through this entire portion of the training plan might looking something like this.

As you can see, there is nothing special about these workouts or their sequencing. It is a simple progression that slowly transitions the athlete from the support paces of 10k and 2mi to their goal 5k pace.

In the middle (mastery) portion of our season, focus in training is one race distance above and below our goal race. Continuing along with our 5k cross country example, that means we are focusing on 10k and 2mi equivalent paces. During this time, you will notice training diverges from one focus workout a week into two since we are focusing on two different paces.

An added benefit to this is that during this part of the season we usually do not have any competitions so one of these workouts is essentially replacing a race. On the endurance side of the funnel, we see 10k equivalent paces starting to replace half marathon pace work. On the speed side of the funnel, we see 2-mile equivalent paces slowly replacing 1-mile pace work. Continuing to work backward with our previous example, here are the workouts you could expect to see.

Again, nothing special as far as workouts go here. Both progressions take the athlete from paces that are two race distances away to one race distance away.

This brings us to the s. For high school coaches this takes place during the summer for cross-country and during the winter for track. This phase has a slightly different purpose than the other phases. While the others are attempting to gradually transition an athlete from nonspecific to specific paces, during this period we want to start at paces the athlete can currently do and gradually build up the athlete’s training capacity. I firmly believe in starting from both ends, both endurance and speed, because both are used in races. When I am reading the training of other coaches, I find that the speed component is often the most overlooked. While I understand the logic that developing speed for an endurance race is training for a small percentage of the overall race, I cannot help but think about a question a fellow coach said to me once. “When is it ever advantageous to be slow in a race?” My answer was, “touché.”

Typically, the early preparation is the longest of the three phases in my training plans because I want to take the time to gradually build up the capacity to train and prepare for the upcoming season. It is also when most athletes will find the most improvements. One stat I heard while attending a USATF Level II school on endurance training was that it takes roughly 28 weeks to develop an aerobic peak. That is over half a year. If athletes are not running in the offseason, then they are not going to reach their full potential.

As you can see, all I am doing here is slowly increasing the volume of the workouts until they reach a point at which they transition into specific work. This has had the biggest impact on my program. Before I started building workouts into the offseason, all we would do is run easy mileage. This was great at getting kids in shape, but not great at preparing them for the race demands they would encounter during the season.

Slowly incorporating and building up workout volume, has helped my athletes run faster and stay healthier for the duration of a season. I would point out that even though we have started doing workouts in every phase of training that does not mean we will do a workout every week throughout the year. We usually build in two weeks off between seasons and then use cross training to slowly bring them back to running six days a week. Once they have started running five to six days a week consistently, then workouts start to be added to the training mix.

Once I have all the progressions calculated for each phase of training, I put them all together in a spreadsheet. While I know there are many coaches who are leery of becoming a “spreadsheet coach”, I like them as a graphical organizer for an entire season’s worth of training. If we put the examples used above together, we would get something that looks like the following diagram:

When looking at this spreadsheet, the top is the beginning of the season and each row represents a week. At the beginning of each week, I will take a look at what I am trying to accomplish and determine how to fit as much of it as I can into the week's training. In the previous spreadsheet, notice that I have color coded the cells. This is to help me determine which workouts need to get in and which ones would be nice to get in if possible. The darker color cells represent my focus workouts, the non-shaded cells are for workouts that are at paces we have done in the past and from which we have progressed.

Since we have already moved on from them, they are usually referred to maintenance paces (not a term I created). The purpose of these is to maintain the adaptations we have already developed. I usually have my athletes do about two-thirds of the volume we used to do when they were a focus workout. We also only do them every other week instead of every week.

Speaking of maintenance workouts, it is now time to go back and fill that in. Let us start with the aerobic side of the funnel. During the early foundational training season, we were slowly building up the distance covered with our fartleks. Since we ended this phase of training at six miles of fartlek, when I go back and fill in the maintenance workouts for this I will cut it down to four miles. I will then go through and fill that in every other week. Once the mile intervals at HP have been phased out, I will put maintenance versions of those workouts in the open weeks.

On the speed side of the funnel, I tend to do something a little different. Since we carry 400m@1mi pace workouts into the second phase of the training season, when I put in these workouts I go back and include hill sprints. They are a great way to develop strength and help our athletes develop proper running mechanics. Once the 400m@1mi pace workouts have been phased out I will add them to the open weeks. Once everything has been added in here is what you would have.

One of the key elements with maintenance workouts, is since it does not take as much to maintain an ability compared to developing it, they provide us with great opportunities to be creative and practice various racing situations. For example, let us say we have an important race in the middle of the second phase of training that has a big hill in the middle. Often I will combine our 4-mile Fartlek with the 6 x hill sprints to make it 2-mile fartlek -> 6 x hill sprints -> 2-mile fartlek. This workout is still a strong enough stimulus to maintain, while also allowing us to prepare for a race.

The final section in the annual training plan is our championship phase of training. As I wrote earlier, this is the last two weeks of the season with the state meet being our final race. The goal during this phase of training is to peak for the state meet. From a workout perspective, we will shorten and decrease the total number of intervals. Since it takes roughly two weeks for the body to adapt to a stimulus, it does not make sense to do any strenuous workouts. Instead, the purpose of the workouts is to maintain the 5k pace workouts while working on feeling the rhythm of this race. I like to use 5x800m@5k goal pace as my focus workout during this phase of training.

There are endless possibilities on how you use the annual training plan. This is where the proverbial “art of coaching” comes into play. Just because I created this annual training plan using a simple and straightforward method does not mean you have to follow it as if it is the rule. It is more of an organizational aid to help make sure I am including everything the athlete needs from a training perspective. 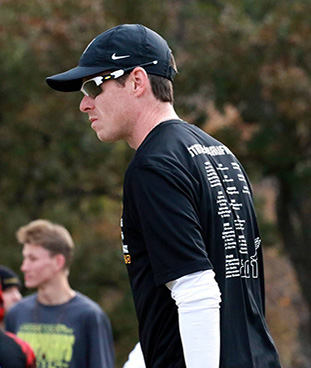 Sean O'Connor (or OC to his friends – and if you bought this book count yourself among them), is a high school cross-country and track coach in St. Louis, Missouri. OC began coaching distance runners in 2005 as an assistant at Pattonville High School. Lafayette (Wildwood) High School awarded him the head boys’ cross-country coaching position in 2011 and the boys’ distance position in 2014. An accomplished distance runner himself (OC has a PR at the Boston Marathon of 2:49), OC shares in this book what he learned from his mentors, his idols as well as from his failures and his many successes.

Sean took the cross-country program at Lafayette High from mediocre to meteoric and the school’s first state title in just four seasons. In his short tenure at Lafayette, he has coached two individual state champions in cross-country along with eight individual and three relay state champions in track, winning the respect of his peers and opponents alike. The “OC Funnel” method he created to train his runners is the basis for his training philosophy and colossal success.

Seans’s book, Distance Training Simplified is currently being sold on Amazon. A "must buy" for all high school distance coaches!