One of my young discus throwers has a chance to be really good, but like many athletes in many sports he cannot quite resist the urge to try to generate power by yanking his head.

What is especially troubling about this photo is that it depicts the ruin of what to that point had been a technically sound throw.

What is even more troubling is that serial yanking can be very difficult to cure. Especially if a kid snaps off the occasional big throw and that voice in his head says, “There! See? I told you yanking your head would work! Ignore that old dude who keeps telling you to finish tall and stay smooth. That’s sissy talk! Just keep yanking, baby and we will do great things together!”

Fortunately, I am friends with Bob Nihells who runs an incredibly successful throws program at nearby Lake Park High School, and Bob agreed to perform an intervention with my guy Dan.

The first thing Bob recommended was attaching a towel to the cage directly behind the ring. Once in the power position, Dan was to keep his eyes on that towel while his left arm cleared and his right hip turned into the throw. Here is Dan working on that concept:

After a couple of days of working that drill, Dan was able to snap off a nice power position throw with little trace of yankitis:

The next step was to perform a South African drill:

Followed by a fixed feet throw:

After several throws with the actual discus, we switched over to bowling pins as a way of reinforcing the “slow head” concept without worrying about how far the implement was going:

I think this was his best effort of the day in terms of keeping his head calm while his left arm and right knee/hip turned into the throw.

Here are a series of photos comparing that pin toss with a full throw Dan took yesterday: 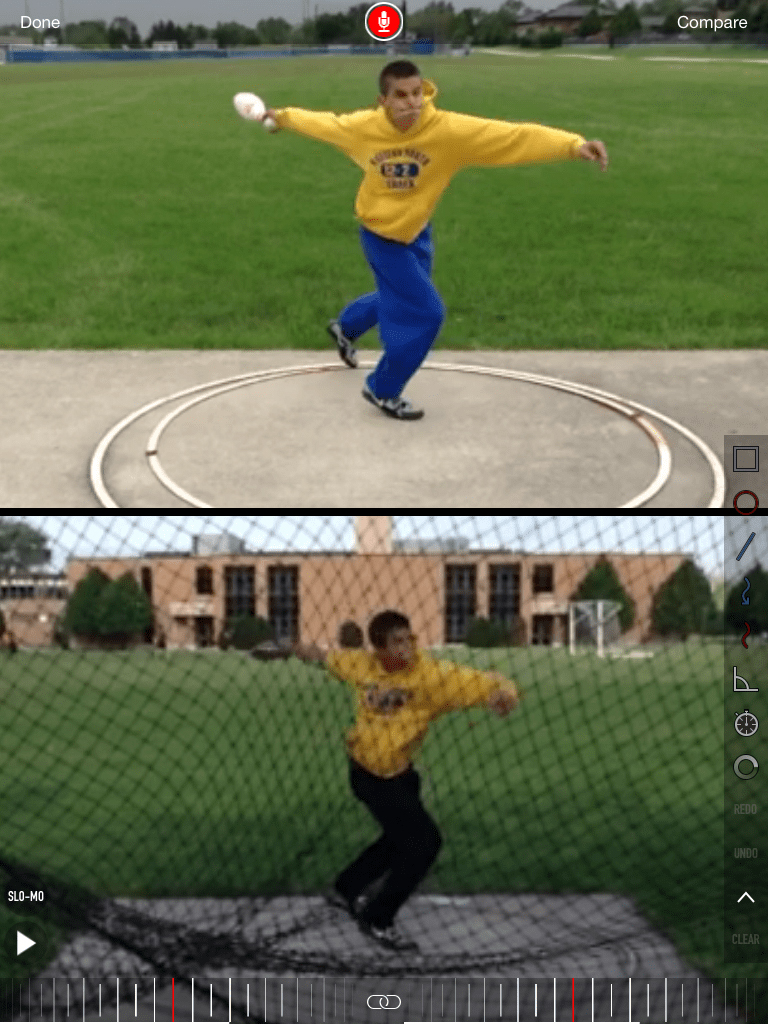 As he hits the power position he looks to be in good shape in both photos. Balanced. Arms long. Weight mostly on his right leg. But, notice that in the bottom photo his head is already beginning to turn into the throw.

That trend continues below. In the pin toss, he has found his focal point and kept his head stationary. 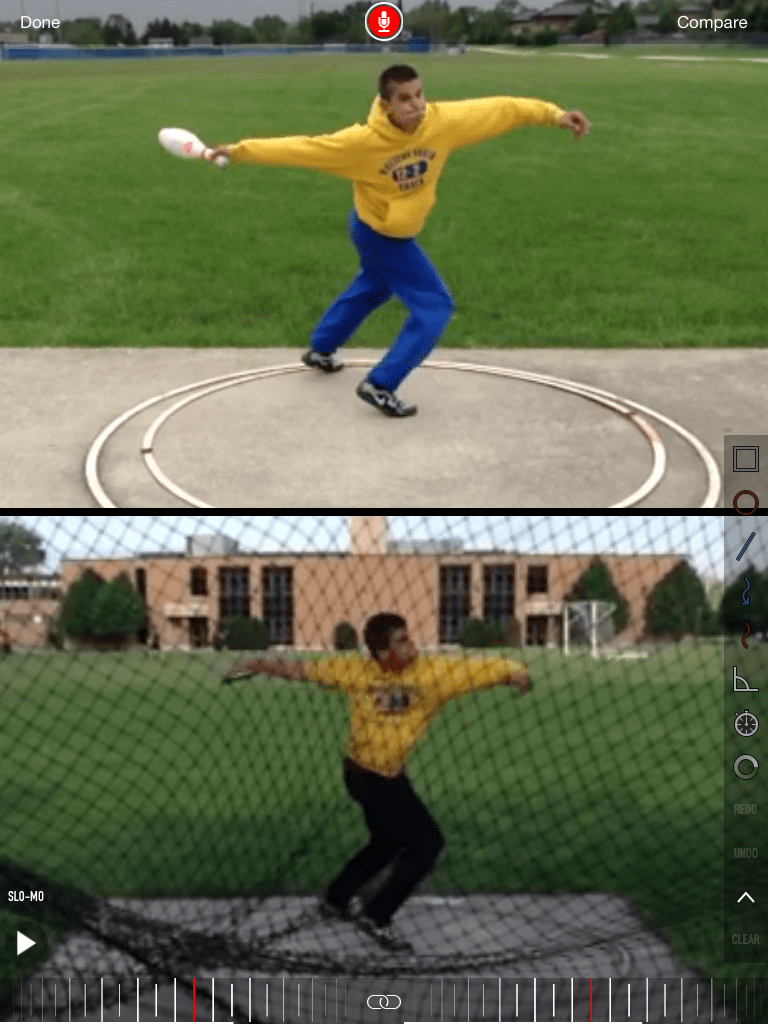 With the disc in hand, he has allowed his head to turn as his left arm sweeps.

Below, he continues to keep one eye on the focal point while driving his right hip into the throw. 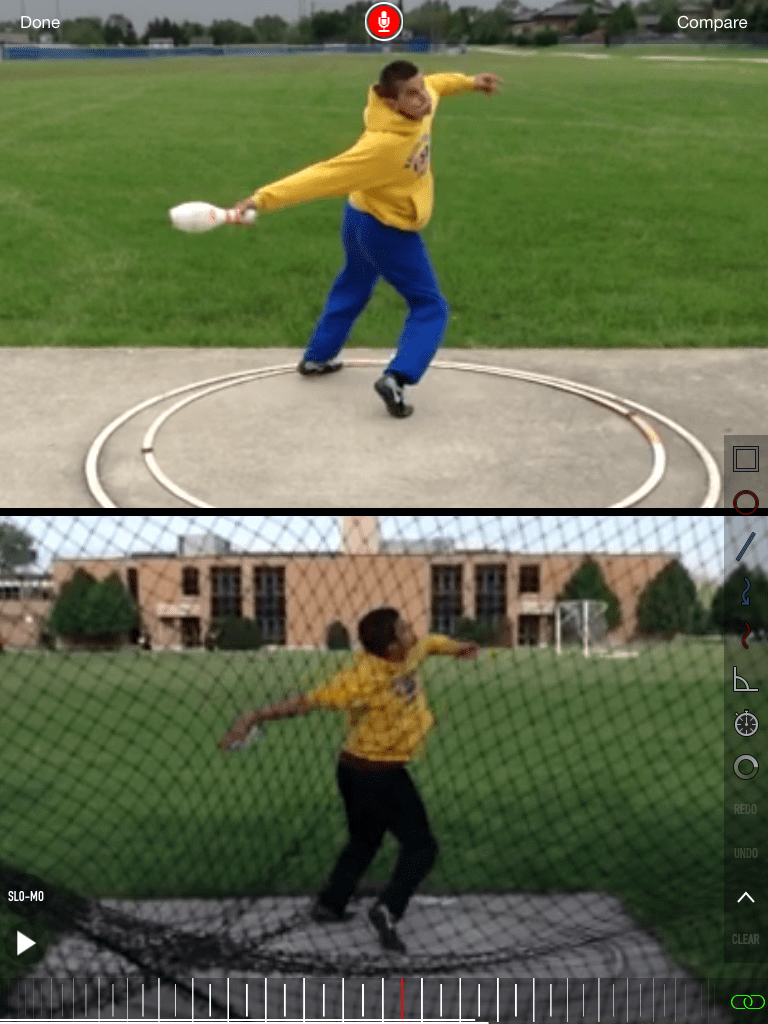 Compare that with the bottom photo. At first glance, he seems to be in good shape in both, but by turning his head along with his left arm he has permitted his weight to move prematurely forward onto his left leg.

In the pin toss, Dan’s weight is still back even as the implement passes his right leg and hip. 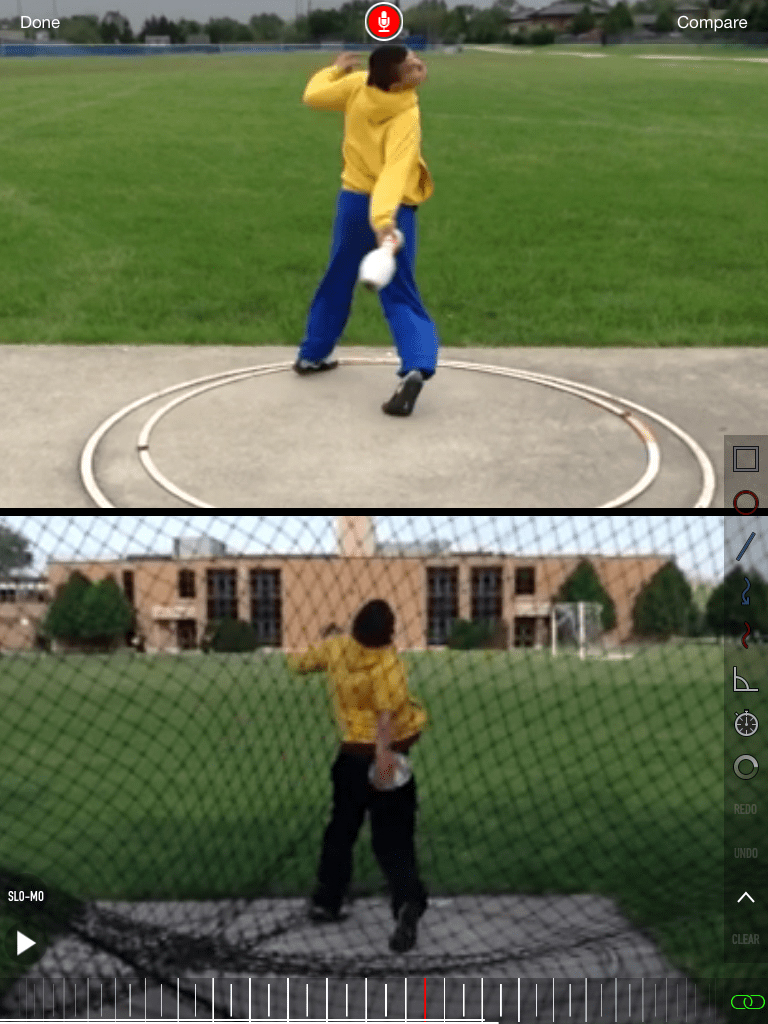 In this discus throw, he has done a good job of getting his right foot turned before the disc sweeps past it, but a good portion of his weight is already on his left leg.

As a result of keeping his head slow and calm in the pin toss, Dan has excellent upright posture on release. 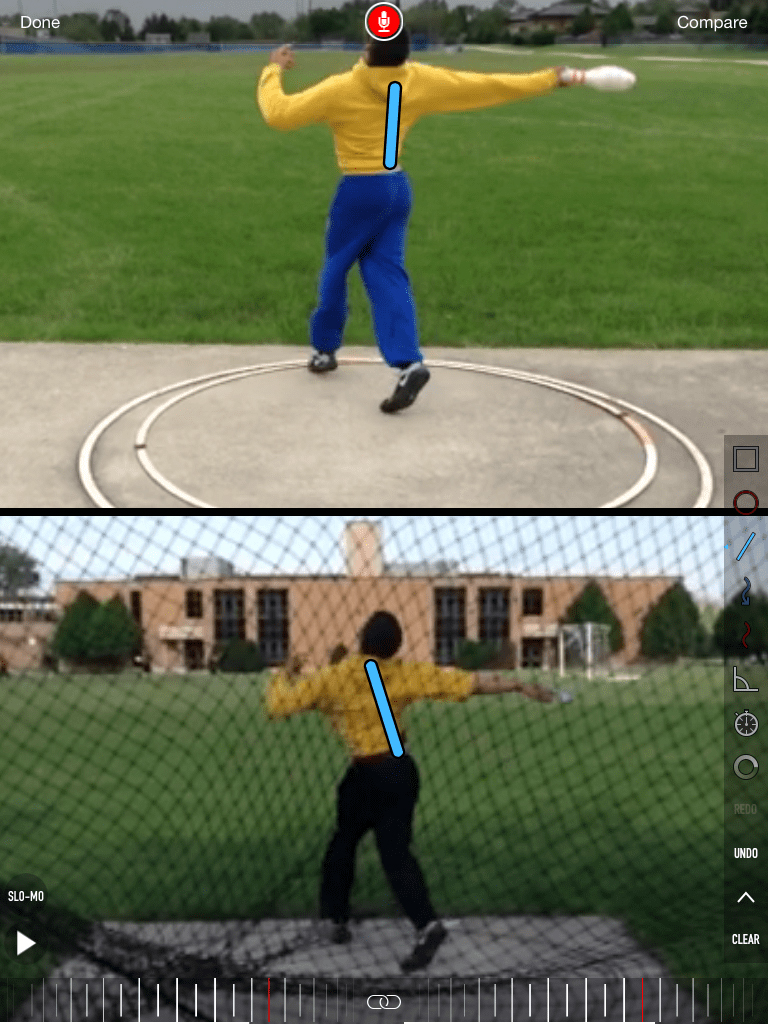 As a result of leading into this throw with his head, Dan’s posture breaks down on release. His weight is almost entirely on his front foot and his shoulders are ahead of his hips. The throw landed out of bounds on the right.

Our job now is to consistently reproduce the technique that Dan displayed on the pin toss. If you look at the vid of the fixed feet throw above, I think he is on his way.