When to Use "Psych up" Strategies

In the research article by Hammoudi-Nassib studied the effectiveness of psyching up your athlete before their intervals and how long the arousal sustained itself. The study found that if you are going to pump up your sprinter, it is best to do it 1 to 2 minutes before their interval. However, if you set them up too early starting around 3 minutes before the interval, you see diminishing returns. Eventually, there is not any improvement in performance. When your athletes learn to master using imagery they can carry that skill set over to the day of competition. Sprinter’s using imagery can learn to bring them to the optimal state of readiness before a race. Considering the fading positive effect of “psyching up” imaginary, it is crucial for the coach or sprinter to perform the skill moments before the repetition or race event. Considering the length of most sprint races most fit well within the positive effect range of 0 to 2 minutes (Hammoudi-Nassib, Chtara, Nassib, Briki, Hammoudi-Riahi, et al., 2014b).

It is important to note a sprinter may have to use this strategy a few times if there are delays in the race schedule or false starts the day of competition. Optimal skill has the highest rate of transfer to improve sport's performance and takes quality practice to maximize. Many coaches on race day are nervous and may push the kid past optimal arousal. As the coach, it is important not to say too much. Bribery, yelling, and coercing does not work at this point. A coach can help the athlete by doing “Chunking” divide up the day to give them different things that will be done the day or days before a major competition. Planning things out the day before can help limit wasted nervous energy before the big race. During the World Speed Summit the Canadian national coach Brian Risk says the chunking plan should be set up with the following items:

What’s for dinner? What time checking gear bag? Time to sleep and how to sleep if difficulty sleeping? Wakeup routine? What and where for breakfast? The plan should literally be set for each of the 24 hours as a countdown mapping out what will happen each hour of the 24 hours before till check into the warm-up race. Athletes like structure and controlled part. Coach Brian Risk considers this to be part of a 24-hour psychological taper that sits on top of the typical two to three-week physical taper before a major race. The psychological taper should be written down and practice at many local meets before the major competition. The practice helps them focus the positive plan 24 hours before the race.

An athlete must have a set routine and process that can prompt the proper psychological response. Music and video can be a valuable tool to push the athlete’s arousal to the appropriate levels for the explosive action necessary for high performance sprinting. A study by G. Loizou studied which different conditions would lead to optimal arousal (Loizou & Karageorghis, 2014b). The study found the best physical performances came with the combination of video, music, and motivational cue stimulus. In our modern world, this combination becomes more accessible to achieve with smartphones and tablets. Anything we can do to reduce anxiety or redirect nervous energy is positive because research in by Murat Yalcin Besiktas, Ph.D. suggested up to 2/3 of sprinters experience anxiety on race day (Murat & Besiktas, 2015). Obviously, this anxiety has a physiological effect on the sprinter’s performance. As it turns outs most of the athletes who self-reported high levels of stress also showed a reduced anaerobic capacity in the study. Coaches must strike a balance to find the optimal arousal for their athletes. Athletes can be divided into two different categories Strategist or Warrior. Strategists according to the Altis staff have the advantage in memory or attention to the task. Warriors have an advantage of greater enzyme activity and tend to be less nervous. It will take a little while to individual figure out what athletes fit into which categories. It is important to note that woman and men, in general, responded differently. Conceptually hormones like testosterone and estrogen play a role in how athletes respond or react to their environment. A coach must be meticulous when giving feedback or debriefing a female Warrior. To achieve an optimal state of arousal for the pending competition, it is essential to use the following race day methods:

1. Music should be high tempo or low tempo depending on being a warrior or strategist. If being brought up the music will need good bass and something that gets the kid excited. A strategist will need to be brought down. This music will slower, lower in volume, and often classical like Beethoven or Celtic mood music. The athlete should develop a mix that can last them at least a half an hour. Thirty minutes should be enough time to stay focused before unplugging for the final warm-up out of the bullpen and on the track. If possible, the music should crescendo to more and more intense music as the mix reaches the end of its 30 minutes.

3. A coach can play a significant role in what the athlete is ready to do on the day of the meet. Staying as positive as possible is essential. A coach doesn’t need to give a long-winded speech. The verbal cues should only take place a few minutes before the athlete takes the blocks or in the holding pen. No need to burn up all the athlete’s psychological fuel hours before they are supposed to race. Hours before the race it is your job to keep the sprinter calm and relaxed. A few words are all an athlete needs. In my program, we talk about an “I will” attitude. If you are not naturally the “hype” man, it might be best to have an assistant coach be responsible for the motivational cues on race day. The coach can also redirect a Strategist type athlete back to their 24 hours chunked psychological strategy.

4. As the athlete readies themselves to enter the blocks, they should use quick and positive self-talk to help focus their effort. A short pep talk should say “I am a sprinter. I will achieve greatness because today is my day. I choose, I will, I believe, now let’s GO!! 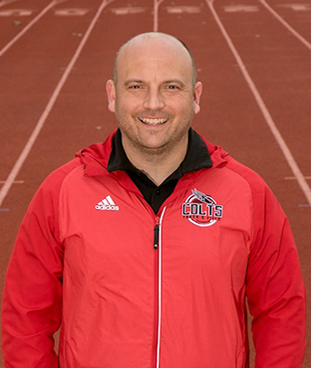 Coach Ryan Banta has spent many successful seasons as a coach at Parkway Central High School. Recently, Ryan authored the popular Sprinter’s Compendium the largest book ever penned on the subject of speed. Coach Banta has become a sought-after speaker around the country on team development and training design. He is a contributor to speedendurance.com, elitetrack.com, and just-fly-sports.com. As a track and field coach’s athletes have become Gatorade athletes of the year, nationally ranked, and state champions. His teams have won numerous district and conference titles. In his free time Coach Banta likes to spend time with his beautiful wife Michelle and his two daughters. Banta is a USATF Level II certified coach in sprints, hurdles, relays, and endurance events. He served as the president of MTCCCA and a member of the MSHSSA advisory board. Currently completing his master’s in positive performance psychology. At the time of this post, Banta's athletes have recorded 112 records (Fr, Soph JV, V), 4 top 5 State Championship team finishes 2008, 2009, 2016 and 2017. District Champs 2007, 2008, 2009, 2015 and 2016. Conference Champions 2015, 2016, 2017, and 2018. Five District runner-up finishes 2011, 2012, 2013, 2014, 2017 and 2018. Two State Records 4×800 in 2009 and 3200 in 2009, 14 nationally ranked events, 62 All-State performances (Track and XC), 11 runners-up, 10 State Champs, 132 State qualifying events/individuals, 194 State Semifinalists (sectionals), and 207 Top Ten Performances.

Ryan’s book, The Sprinter's Compendium is currently being sold on Amazon. A "must buy" for all high school sprint coaches!