National Athlete of the Week is an award selected and presented by the USTFCCCA Communications Staff at the beginning of each week to multiple collegiate Track and Field athletes, when applicable (male and female for each of the three NCAA divisions, the National Junior College divisions, and the NAIA).

Nominations are open to the public. Coaches and sports information directors are encouraged to nominate their student-athletes; as are student-athletes, their families and friends, and fans of their programs. Nominated athletes are noticed before those athletes found through searching TFRRS.

The award seeks to highlight not only the very best times, marks and scores on a week-to-week basis, but also performances that were significant on the national landscape and/or the latest in a series of strong outings. Quality of competition, suspenseful finishes and other factors will also play a role in the decision. 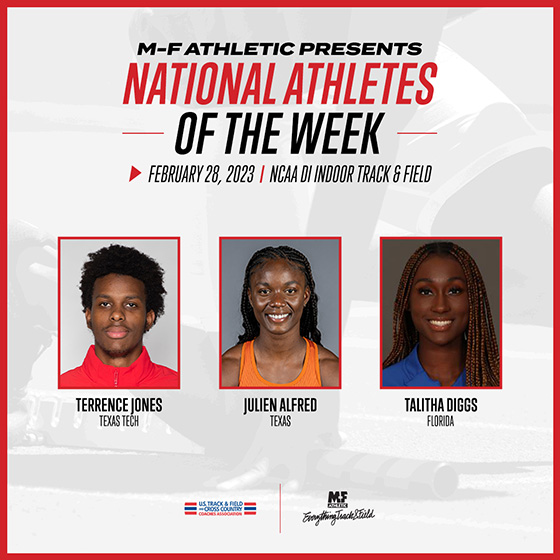 Two. That’s how many men in history have covered 500 meters in less than one minute indoors. Brian Herron became the second this past weekend when he traversed the distance in 59.87 at the Commonwealth College Opener to shatter a seven-year-old collegiate record and narrowly miss the six-year-old all-time world best of 59.83. Herron went out quick, splitting the first 300 meters in 34.53 before bringing it home in 25.33 to etch his name among the all-time greats. This is the fourth time in program history that a male athlete from Texas has been named M-F Athletic National Athlete of the Week during the indoor season. Herron joins two-time honoree Tripp Piperi (2021) and Ryan Crouser (2016) in that regard.

Collegiate history barely eluded Kennedy Simon. Simon, competing at the Commonwealth College Opener in Louisville, Kentucky, became the second fastest woman in collegiate history over 500 meters with her 1:08.59 winner. If Simon was 0.20 seconds quicker to the finish line, Sage Watson’s near five-year-old marker of 1:08.40 would be no longer. This is the first time since 2020 that a female athlete from Texas has been named M-F Athletic National Athlete of the Week during the indoor season (Julien Alfred). 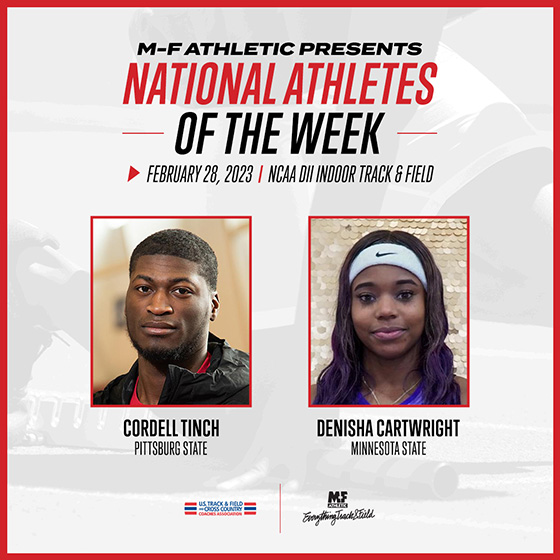 Awet Beraki went to the site of his PR in the 5000 meters – Boston University – and made NCAA Division II history once again. Beraki’s time of 13:39.57 in the Sharon Colyear-Danville Season Opener – good for 11th place in the second-to-last section – made him the first man in NCAA DII history to record two sub-13:40 races in the indoor 5k. His latest time is the No. 5 performance all-time by DII athlete, and just shy of his 13:36.22 that he ran in February. This is the first time since 2019 that a male athlete from Adams State has been named M-F Athletic National Athlete of the Week during the indoor season (Sydney Gidabuday on January 29, 2019).

Denisha Cartwright set lifetime bests in three events at the Chuck Petersen Open. Cartwright’s busy afternoon started with a PR of 8.19 in the prelims of the 60-meter hurdles, moving into a tie for No. 6 all-time among NCAA Division II athletes. Less than two hours later, Cartwright won the final in 8.18 to improve to =No. 5 all-time. Some 10 minutes after the final of the 60H, Cartwright rocketed out of the blocks in the 60 meters for a PR 7.31 to finish runner-up to teammate Makayla Jackson’s 7.29. Both set lifetime bests. Jackson and Cartwright are now Nos. 5 and 6, respectively, in that event’s all-time list. Cartwright capped her day with an indoor PR of 24.21 to win the 200 meters. This is Cartwright’s – and Minnesota State’s – second time being honored as the M-F Athletic National Athlete of the Week in women’s indoor track & field, as she also was so named on February 9, 2021. 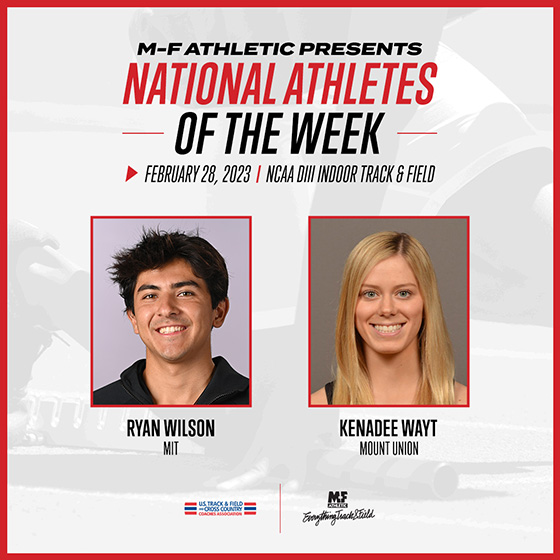 Elias Lindgren is in rarefied air. Lindgren, competing at the Sharon Colyear-Danville Season Opener in Boston, traversed 5000 meters in 14:00.54 to move up to No. 2 in NCAA DIII history in that event. He nearly became just the fourth man in NCAA III history to crack the 14-minute barrier indoors, regardless of track size: Dan Mayer of North Central (Ill.) holds the record at 13:53.17, which he turned in at the NCAA Championships; Ian LaMere of UW-Platteville went 13:54.88 on an oversized track back in February 2017; Alex Phillip of John Carroll hit an oversized 13:58.42 exactly one year ago. This is the third year out of the past four that a male athlete from Williams has been named M-F Athletic National Athlete of the Week during the indoor season. Lindgren joins four-time honoree Aidan Ryan (3x in 2022, 1x in 2020) as well as the record-setting DMR in 2020.

Annika Urban is surfing a wave of confidence right now. Urban, fresh off a cross country season in which she went undefeated into the NCAA Championships and finished sixth in East Lansing, Michigan, became the No. 7 performer in NCAA DIII history over 5000 meters with her 16:29.14 stopper this past weekend in Boston. That marked a huge PR for Urban, who hadn’t gone sub-16:50 on the track before. Six seconds faster gets Urban in the top-5. Ten seconds faster means the top-3. This is just the second time in program history that a female athlete from Emory has been named M-F Athletic National Athlete of the Week. You have to go all the way back to 2015 to find the first time an Eagle soared among the nation’s best: Electra Korn on January 27. 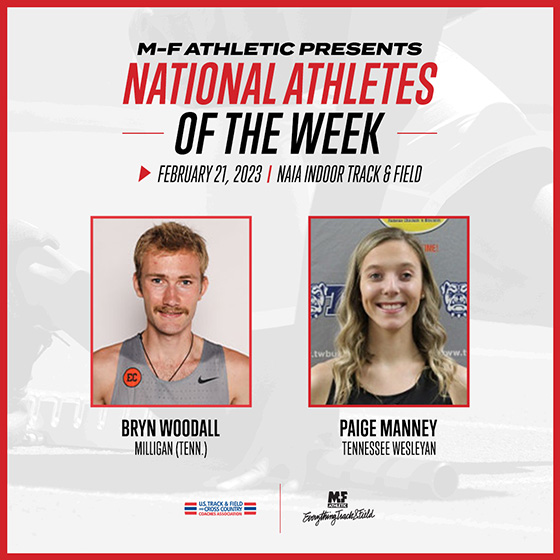 Abraham Chelangam didn’t mind singing solo this past weekend. Chelangam, who won the individual title at the 2022 NAIA Cross Country Championships, continued his stellar year with a blistering 13:58.59 this past weekend at the Washburn Alumni Invitational to win by more than one minute. With that time, Chelangam is just the second man in NAIA history to run sub-14 minutes over the 5000-meter distance.

Nevagant Jones strung together an impressive field series this past weekend. Jones, competing at the BSC Indoor Icebreaker in Birmingham, Alabama, bounded farther than 11.73m (38-6) on four different occasions, including a 12.32m (40-5) marker that gave her the event title. All four of Jones’ legal marks landed among the weekly top-5 in the NAIA. 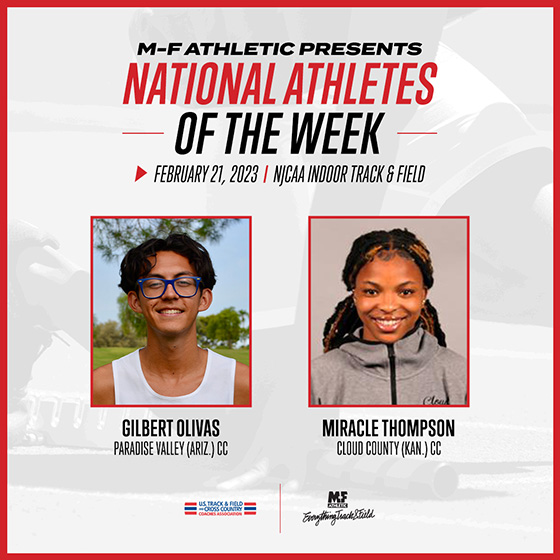 Rivaldo Marshall is off to a fast start. The reigning 800-meter champion from last year’s NJCAA Outdoor Track & Field Championships, Marshall won the 1000 meters at the Washburn Alumni Invitational in 2:27.39. That moved Marshall to No. 13 on the all-time NJCAA list as Warrior teammate Mohammed Al-Yafaee was runner-up in 2:28.03 to become No. 16 all-time. Marshall came back as a member of Indian Hills’ winning 4×400 team, which clocked 3:15.22 for the early seasonal leader in that event. Marshall is the fourth male athlete from Indian Hills to be named M-F Athletic National Athlete of the Week in indoor track & field.

Jahzara Hart started her collegiate career impressively at the Washburn Alumni Invitational. Hart was the leading JUCO athlete in the 60 meters, finishing second in 7.53 seconds. That time would have placed her fifth in last year’s NJCAA Indoor Track & Field Championships. Hart came back to finish as the second JUCO athlete in the 200 meters, clocking 25.19 behind teammate Zaniya King (25.05) as the Warrior duo finished third and fourth overall. Hart is the fourth female athlete from Indian Hills to be honored as M-F Athletic National Athlete of the Week in indoor track & field.