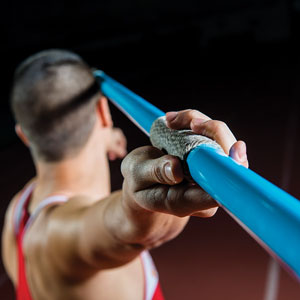 - The javelin lies along the palm of the hand.
- The palm should always be turned upwards.
- The javelin should feel comfortable and secure in hand.

Learning to "Pull Over the Top"

Progression of Crossover to Block (without the Javelin)

1. Front Leg Plant Drill:
Emphasis is on pushing the hips up and over a straight front leg by extending and turning the back leg and hip.

2. Cross and "Catch" Drill:
Emphasis is on crossing over and landing with the weight over a flexed back leg with the back foot landing in an "active" position.

3. Cross – "Catch" – Front Leg Plant Drill:
Emphasis is on driving the back leg and hip as the plant leg is coming in contact with the ground.

Points of Emphasis During Crossover:
a. Do not arch back
b. Push forcefully off front foot initiating the crossover
c. Drive back knee forward as front foot is initiating crossover
d. Hips and feet must remain facing the front
e. Keep front shoulder "closed"

Emphasis is on holding the javelin in a position slightly above ear level and over the throwing shoulder. The javelin should be in a position that is parallel to the ground or tilted slightly downward or upward depending on the thrower's comfort.

Emphasis is on following points:
a. Palm of throwing hand must remain facing up.
b. Draw javelin back in straight line with the throwing direction with the hand staying above the shoulder.
c. Try not to alter running style (feet, hips and head should still face the throwing direction during the drawback).
d. Drawback must occur prior to the beginning of the crossover.

Discussed from the landing of the back leg during the crossover.

As the back leg is landing the plant leg should "shoot" straight through to the front. As this is happening, the back leg should be forcefully extending as the back foot is turning, driving the hip forward. By driving the back leg as the front leg is coming towards the front, it forces the thrower to establish a wide base upon delivery, therefore giving the thrower more time to apply force to the implement. The foot of the plant leg should come down heel first and the thrower should drive the hips up and over a straight plant leg. This will cause a bow-like action or a "reverse C" position at the point just before the initiation of the arm strike. It is important to realize that this bow position is the result of the back leg forcefully driving the hips up and over the plant leg and not by leaning backwards, anticipating the delivery. Leaning back will cause the thrower's plant leg to come down late, which in turn will cause the thrower to "pull" down on the shaft of the javelin and not apply forces to the javelin in the proper direction.

Once the back leg is fully extended, then the arm strike occurs. At this point the athlete pulls the javelin hard over the top of the head, leading with the elbow. The elbow should come through at a level that is higher than the throwing shoulder and the javelin should be released at a level above the thrower's head. The non-throwing hand should be allowed to come towards the non-throwing shoulder as the release in occurring. Emphasis should be on "pulling through the point" of the javelin during the arm strike.

Hip Flexibility and Mobility
1. Cariocas
2. Quarter and Half Eagles

As the Founder and President of the National Throws Coaches Association (NTCA), Coach Rob Lasorsa has an abundance of technical knowledge to share with coaches. He has produced multiple DVDs and written five books on the throwing events. He is the former Head Track Coach at Kent State University.